Check out our catalog for a complete listing of our Rare Books Special Collection: 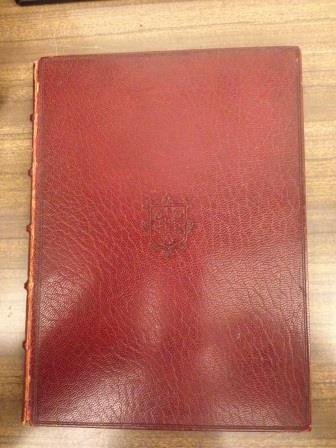 Interpretatio preclara abbatis loachim in Hieremiam Prephetam
(1525)
Joachim of Foire
(1132-1202)
Catalog
More
xJoachim was the founder of the religious order of San Giovanni in Flore. This is an interpretation (or commentary) on the prophetic writings and sayings of “the splendid” Abba Hieremiam which he circulated. Thomas Aquinas thought some of his thoughts were heretical and denounced him as a heretic. However, Dante placed him in heaven among the saints. 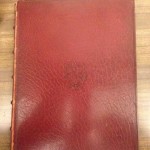 XSavonarola was a Dominican Friar and preacher active in Florence, Italy and known for preaching on civic glory and the renewal of Christianity. A major figure of the late 15th century, he commanded renewed interest as the Reformation progressed. This is an edition of some of his preaching. The printer’s device is on the title page and the text has a few woodcut historiated initials as well as a full-page woodcut portrait of Savonarola. The work was edited by Luca Bettini. This particular book came from the collection of 19th century scholar and convert from Judaism to Christianity, Dr. Johann August Neander (1789-1850). Neander was a beloved pupil of Friedrich Schleiermacher at his post at the University of Halle. 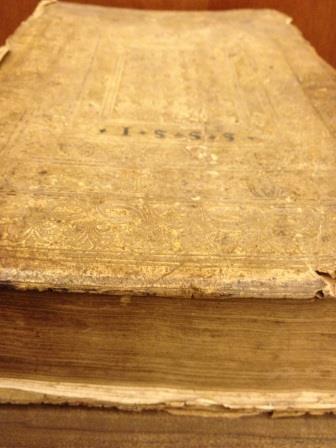 Statu religionis et rei publicae, Carolo V, Caesare Commentarij
(1555)
Johannes Sleidanus
(1506-1556)
Catalog
More
xSleidanus was born in Germany and was well educated, though he was kicked out of school for his Protestant views. This book is his main work, first edition. It is considered the most valuable historical work contemporary to its time, mostly because it contained the largest collection of documents. He was quite adamant about translating and copying important texts. However, Sleidanus died in poverty and his collection was so unbiased and impartial it pleased neither Catholic nor Protestant readers. 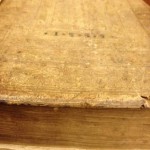 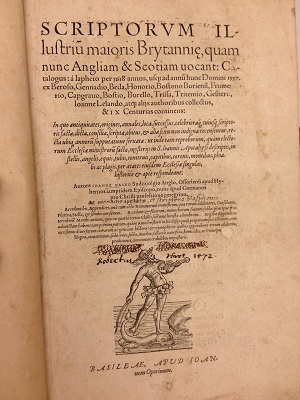 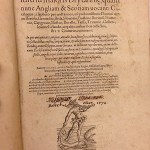 La Biblia Del Oso (Reprint)
(1569)
Reina-Valera
Catalog
More
xThis Bible is from the Vizcarra archival collection and was donated by Bishop Manuel Vizcarra’s daughter. The Reina-Valera Translation of the Bible is still, to this day, regarded as the main Spanish language Bible. This Bible is called ”The Bible of the Bear,” because it bears the imprint of a bear reaching for honey. The bear is the symbol of Madrid, where this translation comes from. The Bible’s title page was traced to the Baravian printer Mattias Apiarius, ”the Bee-Keeper.”It is contested whether the Reina-Valera translation was the first Spanish translation of the Bible, as it is known that Reina could have used the ”Ferrera Bible” which was the Hebrew Bible translated by Jews in Spain in 1553. Another influence could have been Francisco de Enzinas who was so taken by Erasmus that he sought to study under Philip Melanchton. He translated the New Testament into Spanish, but soon was arrested by the Emperor Charles V upon the order of his confessor Pedro de Soto.

Biblica Sacra
(1729)
Sebastian Castellion, Louis Cappel, Christoph Wolle. Apud Samuelem Beniamin, Walther
Catalog
More
xPrinted in Latin this Bible comes from the translation of the Reformer Sebastian Castellio who, amid several confrontations with John Calvin, argued that heretics ought not be met with violence but sharp intellectual discourse. He said, ”To kill a man is not to protect a doctrine, but to kill a man.” When the plague hit Geneva he was the only religious leader to care for the sick and dying. When Castellio passed away he was placed in his family’s tomb. Shortly thereafter, his remains were dug up, burned, and scattered. Later, out of reverence for the Reformer, a monument was erected in his name; nonetheless, it too was eventually destroyed.Apparently, only the inscription remains.
Det gamle og nye testaments Herlige harmonie, of fuldkomme Overeens stemmelse I den laerdom om Christo
(1744)
Enewald Ewald
Catalog
The Holy Bible: containing the books of the Old and New Testaments, and the Apocrypha (in three volumes)
(1785)
Thomas Wilson and Clement Cruttwell
Catalog
More

xFrom title page:”Carefully printed from the FIRST EDITION (compared with others) of THE PRESENT TRANSLATION— with notes by the Right Reverend Father in God Thomas Wilson, D. D. Lord Bishop and Sodor and Man. AND Various rememberings, selected from other translations by the Reverend Clement Cruttwell, THE EDITOR. In Three Volumes. Bath, Printed by R. Cruttwell, and sold by Rivingtons, St. Paul’s Church Yard, Dilly, Poultry, Robson, New Bond Street and Robinsons, Pater-Noster-Row, London.”Rt. Rev. Thomas Wilson was appointed to reside over the Isle of Man, which was quite tattered and destroyed when we came to it. He spent most of his time rebuilding old parishes, building libraries and establishing order and communion with his parishioners. Often he intervened on behalf of his beloved flock to the officials. At his funeral it is said that every person on the Isle of Man was present.Clement Cruttwell was a well-known map publisher and publisher in Bath, London during the time. One can find his works digitized on several online sources.

The Holy Bible, containing the old and new testaments, translated out of the original lounges and with the former translations diligently compared and revised by his Majesty’s Special Command
(1935)
Catalog
More
xThis Bible was presented to the Chapel of Fuller Theological Seminary (formerly on the second floor of the library where the stained glass window is) for public reading by the Class of 1955. 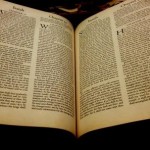 New Devotional and Practical Pictorial Family Bible containing the Old and New Testaments, Apocrypha, concordance and Psalms in metre. Together with a carefully abridged edition of Dr. William Smith’s complete dictionary of the Bible.
(1879?)
Catalog
More
xThis Bible was given to Grace Fuller’s mother on Christmas of 1879. Inscribed inside the front cover is, ”To My Wife, From Her Husband.” It is dated December 25, 1879, and signed J. E. (John Eberley) Payton. Dr. John Payton’s wife’s name was Eliza Kinney Payton. Dr. Payton was born in Iowa but later moved to Oregon. After John married Eliza he was offered a post at a hospital in New York City, but a short time thereafter the young family moved to Redlands, California due to illness. Young Grace came down with diphtheria and it was feared that she would not live long. They heard the climate was better in California, and so they moved. Grace recovered and the Paytons found their home. It was at Redlands that Grace Payton met Charles Fuller and fell in love. 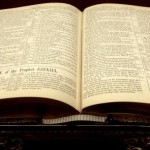